I had planned to write something entirely different when I sat down moments ago  but changed my mind (will get to Trifecta sometime). Happens…a lot...over here. I became fascinated by something that was mindlessly occurring which speaks, no doubt, to my (sometimes a weakness) impulsivity.

I’m not much of a snacker but that’s not to say I don’t eat a lot because I do. Portion control is not one of my strong suits. I just love food too much.

On a rec from my friend Susie (her hubby loves them), I bought this bag of chips. They’re called “Popchips”. Has anyone ever heard of them? 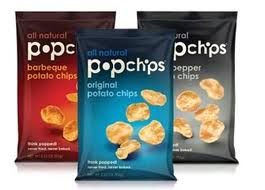 They're really good as evidenced by the fact that I’ve ripped through half the bag in minutes. They taste like ground up popcorn that’s been smashed and pressed together then lightly salted. Yet, they're light and fluffy. Not one lick of grease either!

I liked the bag because it spoke "really light" to me! The tagline on the front says:

The back is pretty funny.

“nothing fake or phony.
no fake colors, no fake flavors,
no fluorescent orange fingertips,
no wiping your greasy chip hand
on your jeans. no really.”

This description really grabbed me because (of my marketing background?) I despise Cheetos for many reasons but mostly because of the fingertip thingy. Since Cheetos were scarcely in my house as I was completely put off by them, my kids, of course, just loooooved them all the more (and my daughter went through a phase where she only ate things that were orange but that's another story). It drove me nuts.

I think I’m gonna have to set a per chip limit otherwise I will devour the whole bag and it would be very easy.

Now I have to remember at which market I picked them up!!!
Posted by Gina at 3:19 PM

Now I have to go and get some!

I can see an addiction forming for me and I don't get addicted to things easily!