Stream of Consciousness Sunday: Saturday Nights Through the Decades

On Sunday over here, there’s this thing we do. Write for five minutes about whatever you feel like dumping (the good, the bad, or the ugly), but don't edit it before pushing publish. I’d like to give a shout out to my auto-correct today for fixing my misspellings and not replacing them with the usual nonsensical stuff.

Boy have my Saturday nights changed over the last quarter century.

We first stayed in on Saturday nights because or kids were little and, frankly, we didn’t have the money for either a babysitter or TGI Fridays. We added ground beef to Ragu, poured it over spaghetti, made some toast, and called it dinner. They loved it! Maybe at ten o’clock when the kids were finally down, we’d have a bottle of beer. Some of the best Saturday nights of our marriage were spent like this.

When we couldn’t get our kids to stop growing so fast, so we rode the roller coaster of activities. Saturday night meals were often rotating drive-thru fast food, or whatever snacks I had in the back of the Suburban. We were a family on the run. Some of our best family memories were during this whir.

Then high school hit hard and our Saturday nights were spent organizing driving shifts with other parents. Maybe sneaking in a quick dinner out or a movie then playing “Rock, Paper, Scissors” for who would wait up. Because the curfew sheriff was always awake. Most Saturdays we wished the kids had their driver’s licenses already.

Wow, was ignorance bliss because once they did, Saturday nights meant no chance of rest until the keys were hung back up. And fingers crossed that curfews were made because who feels like playing “Bad Cop” at midnight, though we would if we had to. We were lucky here.

Being an empty nester, Saturday nights feel a little like being a kid in a candy store. Though whhat we secretly longed for was a text to know how you were. (I’m just being nice. We don’t worry about it all that much.) Wanting to know you are safe.

But still, ironically, the very best Saturday night feeling in the world may be having your kid tucked safely under the covers of their own bed and relishing in the chance to walk past their door, again, with the opportunity to peek in.

That was my Saturday night last night. 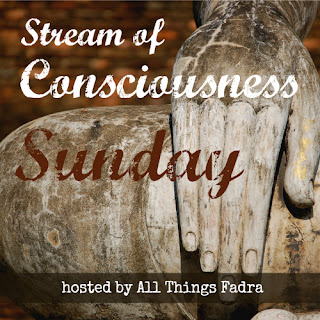 He speaks in perfect, no silky, words. Always patting my ass almost in passing. Biting my bottom lip perfectly. Then there’s the smile. And the perfect timing thing.

They’ll notice your Milky Way eyes and spring in subtly. All narrow hipped and lithe. Magnetic, they are. You can’t look away, be away, stay away. So they'll pull you under. Because they can. By your hair. And there'll be no choice but to hold your breath. Surrender to the pain of pleasure, or the pleasure of pain. Whichever.

People write songs about them.

I wrote this for Velvet Verbosity. Go check it out!

Do You Do This?

"Notice when you are happy, and exclaim or murmur or think at some point, 'If this isn't nice, I don't know what is.'"

It's Monday, May 11th! What Are You Reading? (Long Overdue)

Apparently I haven’t updated my reading list here since April 20th! Yikes! At that time, I was reading feverishly, but since then…well, life. (All photos courtesy of Amazon.com) 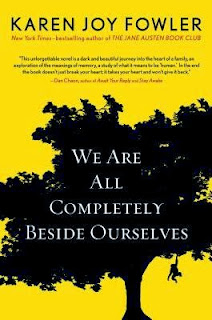 I LOVED this book! The writing is fantastic. The story is compelling and touching and will having you thinking about what it means to be human! Do NOT read reviews prior to delving in because there is a surprise element that, trust me, you will not want to know ahead of time! 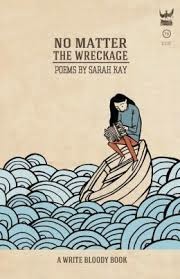 My first collection of poetry. It broke my heart into a million tiny pieces (in a good way) and I will never be the same again. No other poetry collection will ever compare! That is until I find another of equal caliber. Simply stunning! A shout out to Rebecca at Book Riot for recommending this book! 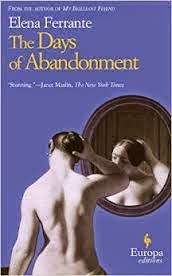 This is what I said on Goodreads about this book:

"Translated perfectly from its native Italian; this novel is darkly stunning. The writing is gorgeous. It recounts a spiral; the depth of which I hope to never know though I could imagine it happening in a perfect storm of events. The souring of a marriage, betrayal, and its aftermath. Then mix in children. How would we pick up the pieces of our lives? It is at once stark and surprising, and touching and tender, but scary. It had me nervously awaiting what was coming next. A very visceral experience. My gut tells me to rate this 5-stars."

Here’s what I AM reading:

As I pulled up the covers to snuggle in bed last night, I picked up... 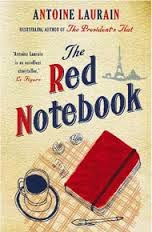 And today, I will finish listening to... 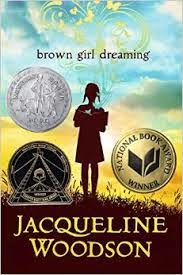 It’s Monday! What are you reading?

Email ThisBlogThis!Share to TwitterShare to FacebookShare to Pinterest
Labels: #amreading, BOOKS, favorite things, it's monday, what are you reading? 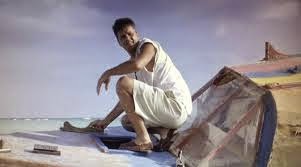 One of my all time favorite movies is The Shawshank Redemption. I can't even count on both fingers and toes the number of times I've seen it because I have watched so many bits and pieces. If we are channel surfing and it is on? We will watch!

Remember the beach at the end? In Zihuatanejo? It became a life's quest to search it out and wiggle my toes in the same sand as Andy.

The movie's beach is actually several miles down the road from Zihuantanejo's two main playas, in a beach town called Barra de Potosi. It is a long stretch of sand called Playa Largo. On Sundays, families spend the day floating in the brackish waters of the lagoon, horses frolic in the sand beside children, and tourists relax in hammocks among the locals.

It is the beach where Red finds Andy. It is quiet and beautiful. I have been there twice.

I know the movie is based on a true life story yet I only knew some of the details. More came to light today. Did you see this?

The real Andy Dufresne was caught after 56 years.

I understand seeking justice and everything, just like seeking the perfect strip of sand (Okay, not exactly the same.). But I really wanted to go on thinking Andy was on the beach in Zihuatanejo working on his boat, sipping a cervaza, and waiting for Red to show up.
Posted by Gina at 1:41 PM 1 comment:

Email ThisBlogThis!Share to TwitterShare to FacebookShare to Pinterest
Labels: Andy and Red, I love movies, justice, sameness, The Shawshank Redemption, wanting to go on believing

There’s always some good stuff on Brain Pickings about so many things, but lately there seems to be more, or I am seeing more, about friendship. Friendship has been on my mind a lot lately.

Maria Popova’s article titled Truth and Tenderness: Ralph Waldo Emerson on Friendship and Its Two Essential Conditions spoke volumes to me today. I thought I would share some excerpts with whoever is out there reading.

“Emerson argues, that friendships have a certain pace of presence and absence, a natural rhythm of “comings and goings” that should be respected rather than bemoaned as a weakness in the relationship. “

“To rush these rhythms or force friendship to comply to a specific fantasy, Emerson gently admonishes, would be an assault on the relationship. Emerson argues that to be impatient in friendship is to mistrust the depth of the relationship and to deny the resilience and immutability of the friend’s affections:”

“Our impatience is thus sharply rebuked. Bashfulness and apathy are a tough husk in which a delicate organization is protected from premature ripening. It would be lost if it knew itself before any of the best souls were yet ripe enough to know and own it. Respect the naturalangsamkeit [German for the slowness of natural development] which hardens the ruby in a million years, and works in duration, in which Alps and Andes come and go as rainbows. The good spirit of our life has no heaven which is the price of rashness. Love, which is the essence of God, is not for levity, but for the total worth of man. Let us not have this childish luxury in our regards, but the austerest worth; let us approach our friend with an audacious trust in the truth of his heart, in the breadth, impossible to be overturned, of his foundations.”

And what is the greatest gift of true friendship per Emerson?

“[Friendship] is for aid and comfort through all the relations and passages of life and death. It is fit for serene days, and graceful gifts, and country rambles, but also for rough roads and hard fare, shipwreck, poverty, and persecution… We are to dignify to each other the daily needs and offices of man’s life, and embellish it by courage, wisdom and unity. It should never fall into something usual and settled, but should be alert and inventive, and add rhyme and reason to what was drudgery.”

And the importance of being enough the same and enough different.

“Friendship requires that rare mean betwixt likeness and unlikeness, that piques each with the presence of power and of consent in the other party… I hate, where I looked for a manly furtherance, or at least a manly resistance, to find a mush of concession. Better be a nettle in the side of your friend, than his echo. The condition which high friendship demands is ability to do without it… Let it be an alliance of two large formidable natures, mutually beheld, mutually feared, before yet they recognize the deep identity which beneath these disparities unites them.”

Because how boring would it be if we were exactly alike! Who's going to keep us on our toes if not our friends? We need to learn and be challenged.

And what about the one-sidedness feelings we get from some. Should we care? Give up on them?

“It has seemed to me lately more possible than I knew, to carry a friendship greatly, on one side, without due correspondence on the other. Why should I cumber myself with regrets that the receiver is not capacious? It never troubles the sun that some of his rays fall wide and vain into ungrateful space, and only a small part on the reflecting planet. Let your greatness educate the crude and cold companion. If he is unequal, he will presently pass away… But the great will see that true love cannot be unrequited. True love transcends the unworthy object, and dwells and broods on the eternal, and when the poor interposed mask crumbles, it is not sad, but feels rid of so much earth, and feels its independency the surer… The essence of friendship is entireness, a total magnanimity and trust.”

Sometimes I forget that friends need space with “room to breathe and grow and just be”. That the need or desire for space isn’t wrong or bad or reflective of the quality of the friendship (sometimes). And friendships have a “sense of presence and absence”, a “coming and going”. That it’s a natural phenomenon.

We all need room to change so then we can present our friends with our renewed freshness and enthusiasm! And “It’s been so long! Where have you been, and what have you done?!?!?” We are thrilled and excited to know all of the answers.

Then sometimes it feels as if the space seemed like we never spent a minute apart.
Posted by Gina at 11:29 AM 4 comments: