A Poem of Frustration 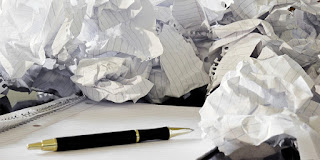 Each time I fix to write,
my fingers freeze up
and wither.
My mind is so pissed off
it scream,
“Come ON, Dumb-Ass!
I spoon fed words
in dreams with popsicle promises,
and you can’t compose
fountain blue on white?
What good are you?”
My mind's lame bitch slap;
She needs to toughen up

'Cause the fighting is
exhausting.

Stream of Consciousness Sunday: Let's Start Writing Again, Shall We?

Five minutes of unedited, stream of consciousness writing hosted by All Things Fadra.

Yep, I’ve been missing here for over a month. There are two reasons why, but it is mostly because I have not felt the ache to write. That's not exactly true and I will explain later. I used to write every day when I started this blog. The excitement was palpable. I couldn’t wait. Well, that was three and a half years ago.

I know the urge and the words ebb and flow. I’m patiently waiting for them to return in a documented form. The weird thing is, and maybe you do this too, I create posts, or morsels of them, in my head almost constantly almost daily. It actually feels I am writing. Mentally. And here, in my head, the words flow easily.

Yesterday, I Instagram stalked some blogger friends (I do follow them, so it wasn’t that creepy) who were attending Blogher. I have know idea where it is being held, but it looked like they were having a blast. They had cocktails in their hands! And I saw one of my hands down favorite writers/people. Kirsten from TheKirCorner.com. I immediately messaged her and she, of course, immediately got right back.

I told her I am happy because she is having a fabulous time. having fun and being recognized for her work. I also said, “I miss writing.”

She jumped on this comment immediately because she hasn’t been writing as regularly either and she proposed a pact. “Let’s start writing again. At least once a week.” Something like that. I agreed and it made me smile. I don’t know when I will start back but I think it will be after the summer.

September 1st sounds like a good one, a start date, doesn’t it?
Posted by Gina at 8:24 AM 7 comments: