I don’t know, 2016 seemed like it had an uncontrollable mind of its own. Many great things happened. Like the Chicago Cubs winning the World Series. Mayhem in Chi-town! Our son graduated from college and landed a job, albeit in another state, and not quite off the payroll, but we will take it (or he DID take it). Our daughter has moved onward and upward from a soul crushing 2015. As they say, you are only as happy as your least happy child. This rings so authentic; it’s heartbreaking being a parent sometimes.

Spent a lot of time together this holiday season, just the four of us, compared to other years. When the kids get older and they have priorities other than family time, it is disappointing because all you want to do is see them and be with them. But we raise them to flap their own wings, test and expand them. They have done this over the last several years. This year seemed different, and we had a lot of quiet game and movie time. Those of you with younger kids, they do come back. With laundry!

The sun popped out as evidenced by the stream of sunlight that just now streaked across my living room floor from the balcony window. It is truly amazing how such a seemingly insignificant event can change your chemical/mental makeup in an instant. Or maybe it’s the cappuccino I finished a minute ago. Yeah, probably that! Hey, my family gave me a Nespresso coffee maker for Christmas. It is something I didn’t know I wanted, but it has been a family hit and so easy to whip up a morning treat! Buzzed by 8:00am.

Saw several over the holidays.

Manchester by the Sea was heartbreaking, emotionally exhausting, so good.

The Fantastic Beast one? Not so much. Then again, I am not a Harry Potter enthusiast, which probably had everything to do with that.

La La Land is a heartwarming, touching and beautiful movie. Never was a huge Gosling fan, but I am very much an Emma Stone fan. They have such wonderful chemistry. You could really feel the love. Go, go, GO!!!

Jackie. We all know the story. I am not sure I learned anything new, but Natalie Portman portrayed her almost perfectly. I guess I came to know that Jacqueline Kennedy was stronger than I thought through the tremendous amount of heartbreak she suffered. I am just glad she was not here when John, Jr. lost his life. So much for a charmed life and Camelot.

Outstanding reads of 2016, you ask? Well, let’s back this bus up a bit first. I committed to finishing 60 books in 2016. Committed to whom? My bookish friends over at Goodreads. And while I did not think I was going to come close a few weeks back, I pushed through, and I am about to cross the finish line with The Sick Bag Song by Nick Cave.

Thank you for so many outstanding books 2016. Here are my five-star rated books in no particular order:

If I had to pick a tip-top favorite off the cuff, I would probably say The Lesser Bohemians. It came just at the right time with the right style of writing and the right content. Funny how books can do that.

But then their were a few duds. Wait. I didn’t rate any book I read this year under three-stars.

It was a very good reading year, indeed!

Yeah, some shitty stuff happened too.

The election, for me/us, got overshadowed by a stalking situation. There is nothing so violating or frightening as fearing for your personal safety. I deal with it every day now, and have, since he was released from the hospital November 30th (after a three week stay) and continues to reside down the hall. He is restricted by the building’s board in his building usage and prohibited from certain public spaces. The 18th floor, though, is technical "free game" although we are encouraged to immediately call "911" if we feel the least bit threatened.  And while I have not laid eyes on him physically since he was forcibly take from our floor by four policeman screaming, in my mental mind he is still very much present.

I do not get off the elevator on my floor with a scarf tied around my neck or gloves on. I sideways glance to the left every time I turn right towards my apartment. I am jittery waiting for the elevator. My eyes are always open and aware in the parking garage. I always have something in my hand and am prepared to throw it or scream. There is a possibility that they will move when his father gets back from sabbatical in Iran on January 12th. It can’t happen fast enough.

His mother has asked to speak with those of use who filed complaints to assure us he is of no harm to anyone. I am the only one who lives on the same floor. I am not sure I can rely on her assessment of his mental health or his reliability to remain appropriate. I declined the request to interact with her. I just can't.

The election is still important; it temporarily took a back seat (and still does, for me, for now).

Oh, and I lost one friend. Kind of unusual for me, but I keep reminding myself that people come and go from our lives.

Do you have any New Year's Eve plans?

It is not that we ever have big plans, but we usually do make time to see some close friends, have dinner/cocktails, play some games, hug and kiss each other at midnight then head home around 1:00am. This is the first time in years that we DON'T have a single thing planned. We might go out for dinner, or maybe we will cook in. Maybe we will stop by some friends in the building. Maybe we won't. It will probably include some champagne. Some sort of game. A movie. Who knows. I am quite looking forward to a quiet, unplanned date night IN.

[Side note: Nunes over Rousey by second round TKO even though Rousey looks in incredible shape. I can’t be watching, but I will be reading Twitter updates beginning at 11:00pm.]
Posted by Gina at 10:44 AM 1 comment:

Guess Who Got to Play Santa Yesterday at the Aquarium?!?!?

Like everyone, I am crazy busy right now. The only thing I will add to that is I am sick. Ugh!

“I never get sick.” said I recently.

Then wham! Bit my ass. Actually, I think it’s the same cold I had a month ago that came back with a vengeance. 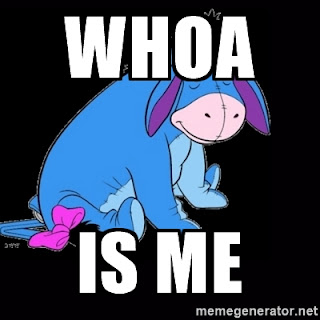 Did you know I am not a shopper? Actually, I am kind of money spending adversive. It scratches nary an itch. Christmas shopping, therefore, gets rather mentally tricky for me. I am not Scrooge. Has nothing to do with the holiday. I just don’t enjoy spending money except on travel.

You will never find me out browsing around, or window shopping. It’s not my first or tenth choice of preferred activities. I buy. I spend if I/we need something. Sometimes I even get asked to go shopping with a close friend who knows, and they assure me that they will pull the quick trigger.

I am wrapped and ready. It helps that I don’t have little ones. Although, my 23-year-old son has never openly admitted to not believing in Santa. When he was about 10-years-old, I’ll never forget him walking into my study.

“If I believe in Santa, does he still leave me presents?”

Not another word was ever said.

Speaking of the man-of-the-month, guess what?

Yesterday I got to play Santa at the aquarium. We didn’t do this last year, and it was an incredible experience. I’d like to think I made hundreds of children happy. I was certainly in a ton of photos. Here are a few:


I also finished my book tree this week. Try it! It is NOT as easy as one might think. Most of those darn books are the same dimensions. For the most part, it is the depth of the tomes and some smaller sized paperbacks that pulled this off. I cheesed it up with some garland, but it currently stands unadorned which I like better. It is in my bedroom and the balance is precarious. I know someone who won't be happy if it falls post-midnight! Which one do you like better? 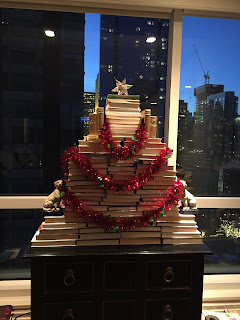 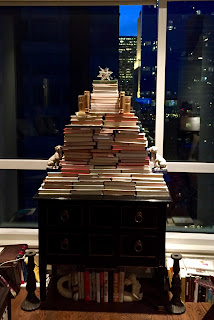 It is hard for me to remember to say “Happy Holidays”. It doesn’t spring from my lips as easily as “Merry Christmas”. I mean no disrespect.

Just know, however you are spending this beautiful season, make it meaningful. Whatever meaningful means to you.

For me, it will be all about spending time. Being present. Real, touchy-feely, interactions. I can’t wait.

Email ThisBlogThis!Share to TwitterShare to FacebookShare to Pinterest
Labels: Christmas book trees, Happy Holidays, Have Yourself a Merry Little Christmas, no time to think of clever tags, Swimming Santa

Friday Afternoon Thoughts and Reading or Thoughts About What I'm Reading.

So I'm right this minute reading a book. Actually, I set it down to write this. Well, that's obvious.

The thing is, I stopped to ponder Katrin's (the main character) number one worse fear. Here's some back story so you can understand my train of thought.

Katrin and Eric were married for forty or so years. Forever! Eric has died and it's devastating. In their attic, Eric kept carefully tied and bundled letters in duffle bags and a trunk for fifty years. Since way before he was married to his first wife or Katrin. I'm talking hundreds and hundreds of them. Maybe I'm exaggerating, but I don't think so.

Eric took a trip with his school chums to the south of France when they were young. Fun and adventure is lovely at any age, isn't it? Somehow, though I don't yet know why but I think for temporary lodging, he is steered towards a woman named Monique. You see, most of these letters, opened and unopened, to Eric are from her. And he did not discourage Katrin from reading them. In fact, he told her to. She's a writer of people, biographies of a sort. And writing about her husband through these letters may help in her grieving process, he thinks. As a matter of fact, the last story he was able to tell her was the beginning of the adventure that lead to the letters in the first place and he was so happy.

Back to Katrin's fear. She's begun translating Monique's letters (those opened by Eric) since they are in French. Her mind starts spinning.

What if Eric lived an intensely richer, more passionate life before their marriage? What if she didn't know him as well as she thought? Should she halt her efforts to learn more despite what she may come to learn?

She's NOT snooping. The material belongs to her now, but how much do we actually know about our loving spouse's life before us like their innermost thoughts and feelings about others? How much do we want to know?

How much do I know?

In turn, how much does he "really" know about my time before him? Certainly not every little bit of everything.

Sets my mind to spinning, too. Okay, I'm back to reading. I'll report back about what more I discover.
Posted by Gina at 5:02 PM 3 comments: