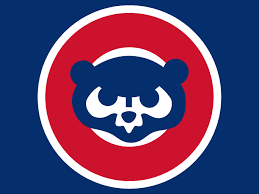 I live in this city. Chicago, that is. Home to the often frustrated sports fan. It is pure insanity right now. Not sure we have seen the likes of this since…certainly not when the Bears went to the Super Bowl even.  Or The Rolling Stones came to Soldier Field.

This stuff is right here! At least for the next three games. The Ferris wheel has the Cubs logo in its center. The majority of the people seen walking around have on some sort of Cubs gear. There is a vibrancy I have yet to see since maybe the Presidential rally for Obama or maybe ever. Lollapalooza doesn’t hold a candle to this enthusiasm. Out-of-town fans fill every street corner. Traffic is almost at a standstill.

I live about three blocks from the iconic and original Billy Goat Tavern on Lower Michigan, which is part of the old, drippy, underbelly of Chicago that always looks like nighttime, but the burgers are good. The place was famous before the Blues Brothers stopped in. Fans were taking pictures just now out front.

I ran an errand past Harry Caray’s old Italian steak joint. Again, people taking pictures of the restaurant’s sign and a Clydesdale horse hanging out on the sidewalk. What does a Clydesdale and the Cubs have in common? Beats me!

I have been a life-long Cubs fan. Those of you who know how old I am can attest to it being a long time.

When I was growing up, our parents, who did not have a lot of discretionary income, took me and my little brother to one game a season. We seemed to have the same seats along the third base line just behind the Cub’s dugout. We would get there early (more bang for our buck, I’m guessing) to watch batting practice, warmups and, with any luck, inch our way up to the railing to get some autographs on our score sheets we faithfully kept all game (Dad was a stickler for accuracy!). We binged on hot dogs, ice cream and peanuts. And so it went every year.

I lucked out in college by living in the same house as the daughter of one of the team’s VPs. We would travel up from Normal, Illinois at the beginning of April to watch Opening Day at Wrigley under usually freezing and wet conditions. Beer solved that problem.

Last year, we went to five or six games. This year, we had tickets for twelve. It has been a good year for all of us who have been waiting.

It’s a crazy day that will only get crazier. Tomorrow will be worse, better, worse. Every errand has taken me longer, but every person I have encountered is in a festive mood. How awesome is that?

And that’s just down here. Up north about 2.5 miles, the neighborhood called Wrigleyville will be an entirely different story. It will be truly insane.

Our guys just need to bring their bats tonight.

I got to know, what was it like to see Rogers Hornsby play? ;)

Has anyone told you lately you are so funny?

At least they made it back to Cleveland. Gravy from here.