People Who Spoil All the Fun: Yeah Write

Ever looked forward to an adventure, something really cool and fun, then someone has to spoil your carefree feeling and excitement by mentioning the pitfalls, and scary parts, of actually doing it? Yeah, me, too.

I work at the aquarium in Chicago as a volunteer diver (all 86 divers are volunteers except for the dolphin and Beluga whale trainers, who may or may not be divers. They are probably just trainers, which is so cool.). While doing pre-dive preparations yesterday, the Aquarist of the Amazon Rising exhibit, asked me for a favor. He’s never before probably because I’m low man on the proverbial totem pole. Yep, a peon!

“Have you noticed the difference between the turtle shells?”

“Yes.” (which really meant I sort of noticed.)

“Will you grab one of the two bigger ones (approximately 2.5' long, 18"wide) with the curved shell? I need to do a procedure. Doesn’t matter which one. See it halfway under that stump.”

I stuck my head underwater.

[I was so excited because I have many years of experience catching turtles at the lake with my kids.  We’d mark their shells with red nail polish, put them in a homemade turtle terrarium (read tub), and feed them fishy food and bugs for a few days, if they didn’t crawl out sooner, or failed to survive evening (bloody) raccoon raids. (Imagine explaining to young ones why it is suddenly important to keep the terrarium inside at night, without, of course, any mention of the covert task of massacre clean up, but including a tall tale about turtles needing to be with their mommies, too.)]

“The little ones are friendly. These big guys will bite.”

“Did you have to tell me that?”

“They’re more aggressive. Don’t get your face or hands anywhere near their mouths. (I WON’T) They have very long, sharp claws, too, that can slice skin wide open. You have gloves on. You should be fine. Just be careful. Here’s the net.”

Well, that spoiled the whole freaking turtle catching adventure because now I was nervous, tentative, a little scared, which is not how I wanted to feel when trying to exude bravery and secure the turtle. Plus they aren’t the only creatures in these tanks. There are three giant Arapaimas the size of 300-pound men, 5-foot long, butt-ugly catfish, and Stingrays with barbs scattering underfoot.

I swear that turtle knew I was coming because when I got back in the water, it was long gone. I had to go looking while wading amongst every other animal in my way. Did you know it’s possible to break into a full-on, fearful sweat underwater? I found that sneaky thing wedged into a corner, adjacent to the sand-colored stingray sucking face with the glass. Her head and claws (temporarily) drawn into her shell.

She fought me some as I gingerly carried her up for her procedure. I did it. I was sweaty and scared, but I did it.

On my way home, I thought a lot about the ways other people sometimes, purposely, spoil our excitement about adventures, and things we look forward to doing. I don’t believe he was purposely trying to do so, or ruin anything, even though I do believe he was testing me (Did I mention he’s the same guy who, a few weeks back, purposely sprinkled turtle food above my unknowing head, and I couldn’t figure out why the turtles wouldn’t leave me alone?). I don’t always understand when it happens at other times, with other people. I also wonder why I let them. 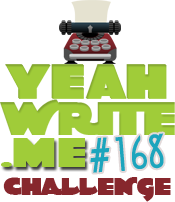 Email ThisBlogThis!Share to TwitterShare to FacebookShare to Pinterest
Labels: adventure, being scared, bravery, experiences, it's been so long, spoil sports, Yeah Write

What an awesome environment to work in! I don't know anything about that world, but I thought you were very brave and adventurous. And even if he spoiled your fun a little bit, it's probably for the best that he gave you a heads up. Not so you the turtle food above your head, I guess :)

That's such a cool thing to do! I have to admit, I am hugely terrified of water-dwelling creatures of all kinds, so am extra impressed!

Well however you look at it, that is such a cool thing that you do! Next time sprinkle the food over his head. ha ha

You're soooo cool!! Like sam, I am a total water phobe. you'd never find me doing any of that. so interesting that you can break a sweat under water. wild. and um, stay away from turtle dude.

DUDE. you work at THE aquarium?!??? that's is crazy awesome! the biting turtle?? yikes lady you got some big balls. ;) :)

The underwater world is amazing. You glide through it, not belonging, but as a secret observer. Yeah, the heads up was important for safety but he took it much further to razz me a little. Sometimes I take people seriously when I shouldn't. Next time I won't be so flustered.

Everyone is comfortable in different places. Just takes time and opportunity to feel at ease.

Hahaha! He doesn't get in the water!

When you're nervous, you can break a sweat anywhere! The turtle dude is the boss. He's a cheeky one though!

Yes, at The Shedd. It's super fun! I'm there for several hours before it opens to the public. Has Lovey been? If you bring her on a Tuesday morning when it opens at 9, I'll stick around for a while.

Turtles. They sound so cute, but sometimes they can be creepy (I have a small one myself). What a very cool job, though!

Very cool thing you get to do, hanging out with the sea creatures!

When I watch them swim, at the aquarium or in nature, I get all glassy eyed and mesmerized. I forget they are wild animals. All turles are cute,, except the lake snappers, but they carry icky stuff! Thanks, I like it!

I'm happy to be doing it. Diving is a passion.

Holy moly you are a brave woman! And, I do the same thing by letting folks mess up something I'd be looking forward to. I just wish I could put a hand up and say STOP before they get the third word out. Ya know?

Now you've made me homesick for Chicago...

You're a Chi-town gal??? Come back for a visit. I know someone who can score free tickets to a certain (any) museum!

It's all a facade ;-). Obviously, I do it too. But it is getting increasingly harder to talk me out of stuff. "In to" is a completely different matter, however!

Fascinating post. I volunteer with cats at a shelter, but the aquarium sounds a lot more challenging. Glad you got her up there without being bitten.

A man who sprinkles turtle food above your head needs some Ex Lax brownies to enjoy. Never hurts to spread some joy. ;)

I agree with jack. Turtle guy needs to step back and rethink his presentation. I hope you keep having a blast! We are going to come see you !

Funny!!! He didn't mean anything by it, and probably wouldn't have done it if he didn't think I could handle it. I like to pretend I'm braver than I actually am, so this kind of thing would happen to me.

He works with fish. Maybe he's not all "there". Kidding!!!

Come visit! I have a couple of Tuesdays off here soon. Give me a heads up so I stick around. Doing yoga in your city 'hood after work tomorrow instead of driving all the way home.

Whew Gina, you made my chest tight! Do you think you would have approached the turtle with the same caution if he hadn't said all of that stuff? I know what you mean though. When we went zip lining last year and got the needed instructions, someone asked if anyone had ever been hurt. There was a gross explanation that I didn't need to know and then I was worried about Christopher making the same mistake. Everything was fine but I enjoyed it less.

Right To Your Inbox